Some authors of ISO deliverables recently asked us about the correct styling for NOTEs and EXAMPLEs in Word document submissions to ISO editors. So here’s a post to answer that!

Are there formal guidelines?

Styling guidance of NOTEs and EXAMPLEs in ISO deliverables are not explicitly described in ISO/IEC DIR 2.

The styling requirements of these data elements therefore falls into the responsibility of our beloved ISO Editors.

Indeed. And there are plenty of reasons why not to burden your ISO Editor for accurately applying the styles.

Today, each ISO Editorial Programme Manager (EPM, or “ISO Editor” for short) covers nearly 30 TCs/SCs. This presents them with a crazy workload, yet, for those who have experienced the pre-publication edits, they manage to deliver impeccable work. Most of them appreciate your gesture in helping reduce their workload.

I digress on the ISO Editing process. The point is, whatever is not stated in ISO/IEC DIR 2, the requirements will be loosely based on current accepted practices of ISO Editors.

What are the guidelines?

Today’s styling of ISO Word documents (reflected in their PDF and print output) is determined by the ISO editors, although EXAMPLE styling is also not made explicit in the Word stylesheet issued by ISO.

There are only two hard requirements that apply identically to NOTEs and EXAMPLEs, as stated by our favourite ISO Editor are:

In Metanorma ISO output, the main body text is 11pt, NOTEs and EXAMPLEs are 10pt.

Our favorite ISO Editor has confirmed that NOTEs and EXAMPLEs can contain:

NOTEs are styled with a Note style in Word.

While NOTEs could technically contain complex block content, they have to be readable and understandable. To this end, we refer to ISO/IEC DIR 2, arguably one of the most complex ISO deliverables in terms of structure.

In ISO/IEC DIR 2, NOTEs are only available in single paragraphs.

Therefore Metanorma ISO NOTEs assumes that they only consist of paragraphs. While multiple paragraphs are technically allowed in Metanorma grammar, it is probably to be avoided.

Examples are styled with an Example style in Word. Example paragraphs, too, are 10pt.

Unlike NOTEs, there is no perceived limitation for EXAMPLE content.

Both Metanorma and ISO/IEC DIR 2 permit multiple blocks in an example, and they can be heterogeneous, including blockquotes, source code, lists, formulas, and notes. (There is no provision in the Metanorma grammar at this time for tables nested in examples, and labelling them would be problematic.)

Unlike ISO/IEC DIR 2 (25.6, Example 2), Metanorma does not support nested examples. 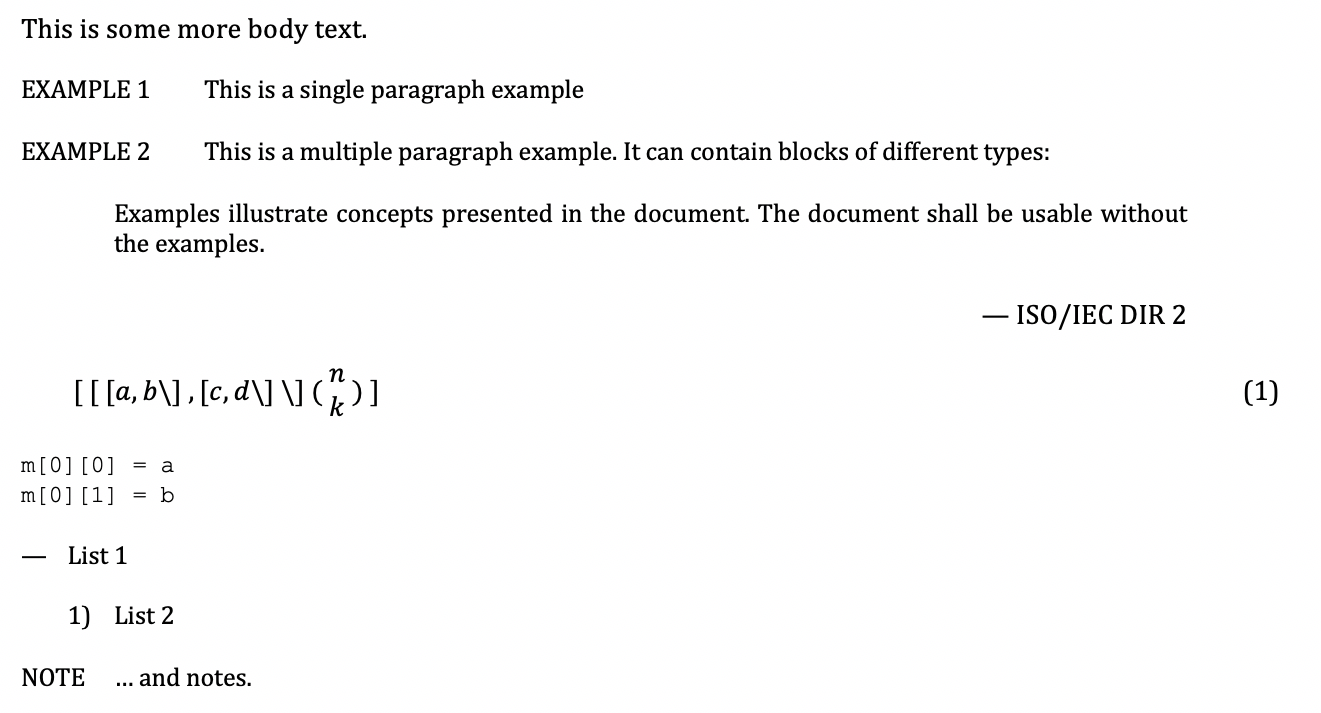 Remember, whatever you do, keep your ISO Editor / EPM happy!